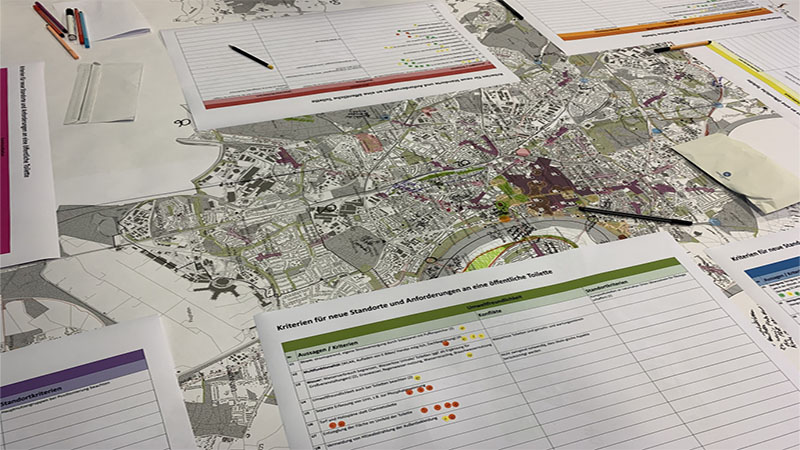 Public toilets in a city are relevant since they tackle a basic need. Everyone in a city, visitors, inhabitants, young and old will eventually have to use a restroom.

Currently, TSPA works together with Zebralog in the provision of a city-wide strategy for the provision of toilets in the city of Düsseldorf. This ongoing project has given us insight into the real impact of public toilets on the city and its residents and has taught us a range of new skills and methods for dealing with a large amount of unstructured data from various stakeholders.

To explain this in detail, our colleague Jan Cyganski shared some insights and learning outcomes in an interview.

The current stage of the project

So far, we finished the analysis of the existing toilets. We did a lot of GIS analysis using data from the city, such as toilet facilities and site visits. At this phase, the participation was already essential.

We all delivered the inputs that our partners Zebralog managed, processed, and organised and we prepared the output.

Can you describe the participation process further?

The formats of participation were interviews and workshops. Interviews were held with the departments of the city while district representatives and city departments participated in the workshops.

The participation gave us information regarding four main questions,

There are, of course, other details like what kind of toilets need more qualifications than others.

Tell us more about this last workshop.

This last workshop was held with the district representatives, which allowed us to have access to a profound knowledge of each neighbourhood and its needs. The information that we got access to would never have been gathered through spatial analysis alone.

As an example, there was one hub located next to a P&R (Park and Ride), which was supposed to provide coverage for the whole surrounding area. Local authorities prevented us from using this location because the area was elevated, and there were no pedestrian crossings to access, which ended up making that toilet not accessible.

They had local knowledge that we didn’t have, and this knowledge is essential to make a successful concept.

What are, in your view, the primary outcomes of this workshop?

We could collect all the local knowledge in terms of  the four main questions I mentioned before, and we also gathered information on the state of the toilets — problems like vandalism, for instance.

We got an idea of which are the characteristics and needs of each district because they varied among each other. For instance, district one, the central district, has  good coverage of existing toilets, but they have a more significant issue regarding “wild peeing” or people peeing on the streets.  Whereas the districts in the outskirts face other problems, one-third of the whole homeless population of the city lives in district six. Therefore the district has different public toilet needs. Another example is district three, which has a problem because its green areas and parks don’t have public toilets.

You are thinking of a city-wide strategy at different scales because it emphasises the local needs for each district.

Yeah, I would say that until the last workshop most of our information was on the city-wide scale and considered the quality standards the toilets need. This workshop helped us dive into every district needs at the local level.

What challenges would you name as the biggest you have faced in this project?

The data gathering because it keeps updating at a late stage of the project, and it seems like it will continue to be updated.

From this challenge, we learned that we could involve the districts even earlier in the process.

Toilets are a fundamental need. Has being part of this project taught you anything about people’s needs that you maybe haven’t considered before?

As I said already, the challenges of district six with homelessness was new for me, and I also learned to consider the needs of the elder. District two, for example, asked for a toilet because there were a lot of older people demanding it.

This approach to local authorities participation allowed us to approach general concerns in the population and the toilet needs they were facing.

Personally, do you think the project has taught you anything regarding toilet use and inclusivity that probably you didn’t consider before?

Definitely, I realised how important the topic is for the city and how important toilets are for specific users. Already in the previous project of Berlin Toilet strategy, we realised that older adults would use the areas, change their route or even their supermarket based on their toilet availability.

The current equipment for disabled people can always improve, and I learned that there are broader levels of inclusion that I didn’t consider in the past. Some standards are not standardised that you have to think about very strategically because they are necessary, but you cannot implement it everywhere because of the costs and because they can easily get damaged.

TSPA works closely with the city government, local authorities and our partners Zebralog in the development of a strategy that can improve the everyday life of people in the city.